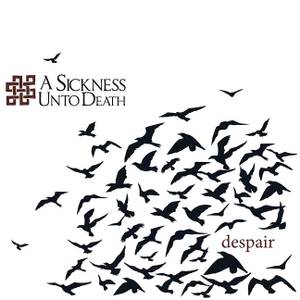 "Digipak - From the mighty opening riff of Epic Fail to the final notes of Flames Leap High, despair by north german doomsters A SICKNESS UNTO DEATH might just be the Doom Metal debut of the year. They managed to create an own unique sound on an instant, resembeling heroes like PARADISE LOST or ANATHEMA without copying them. Keeping their versatility at a maximum they combine soaring clean vocals with intense growls, acoustic passages and intelligent lyrics and deliver epic Doom Metal anthems such as the mighty 9-Minute-Opus Ghost Light Dawn right next to the ballad Ruined or the instrumental title track. If you like your doom moody, melodic and melancholic, despair might be just the record you need! A Sickness Unto Death formed in the beginning of 2012 as a collaboration between Michael Maas and Tim Ziegeler. Michael runs the small project studio "Refuge Studio" close to Bremen, Germany. During the last two years he has been writing doomy and gloomy songs reflecting some of the more despairing circumstances in his otherwise fulfilled and happy life. Tim also hails from the German north and has been involved in several musical projects such as the doomy Visions of Moribund and the brutal Hasszorn. Tim immediately connected to Michael's material and began contributing his signature vocal lines and lyrics. Since then, the duo has continued writing songs which will culminate in the release of the album "despair". The album was finished in January 2013 and will be released in May 2013 through TWS-SOD." - Metal Mailorder
Tracks