Home » VINYL » LP - heavy metal/hard rock » ALL FOR THE KING: Let There Be Light LP/black vinyl 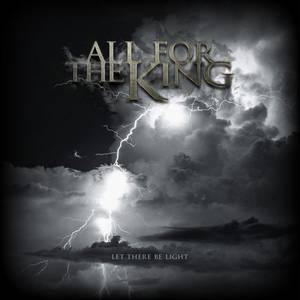 All For The King is back after the critically acclaimed debut in 2017. The band has been called a "modern Black Sabbath" and worldwide reviewers have one by one compared Erik Tilling's guitar playing with hard rock riff master Tony Iommi and singer Ricard Hulteke with legend Glenn Hughes.
The band today consists of the experienced musicians Erik Tilling - guitar, Ricard Hulteke (Empire 21), - vocals, Andreas Ålöv (Empire 21) - electric bass and Richard Tonyson on drums.

They themselves think that they this time have developed the basic concept. The joy of playing is palpable and the focus is, as always, on the riffs and the song melodies. But ultimately, All For The King is about the lyrics: To stand firm with both feet on the ground and the heart in heaven. Do not compromise on the message. In everything they do, they try to live wholeheartedly and think "what would Jesus have done". The Bible's foundation is clear.

Said about the debut album:
"The songwriting is of such quality, both in terms of weight and harmonies, that it is easy to take it for original material from the era that the band looked at" (Urban Thoms, Daily News)

”All For The King is definitely a band worth seeking out if you have an interest in classic metal that does not sound dated” (Ian Webber, Crossrythms)

“With so much great music flying around my desk, it is only so often that one really grabs my attention, and All For The King did just that.” (DougVanPelt)

For fans of Whitesnake, Dokken, and Y&T Featuring the elite axemanship of Rex Carroll …

ALL FOR THE KING: All For The

Amazing hard rock/metal debut from Sweden! Released as a nice digipak CD. Check out one song …