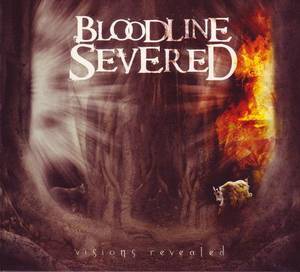 Face melting progressive modern metal is the modus operandi of Bloodline Severed. Coming to us from North Carolina, Bloodline Severed has been percolating in the Southeast underground metal scene for nearly 5 years, playing shows nearly every weekend for a rabid fan base. Pulling together various musical nuances, the band melds crushing guitar riffs, bombastic drumming, slick technical guitar solos, brutal death- and black-influenced vocals, big powerful choruses, and catchy melodies and hooks that stick with the listener long after the song is done. Each song has its own unique feel while remaining cohesive with the rest of the tracks on the CD. The album itself is a concept album exploring a journey of light and darkness and finding hope amidst despair. The songs possess a progressive feel, with various time signatures and complex structure, while still remaining extremely accessible and maintaining a modern edge that is relevant for today’s metal scene. Originally released by the band as a professional CD-R release for touring purposes prior to signing with Bombworks Records, the CD has been completely remixed, remastered, and given an artwork overhaul in the form of an 8-panel deluxe foldout digipak. Drawing influences from bands such as Meshuggah, At the Gates, In Flames, Demon Hunter, and Killswitch Engage, Bloodline Severed is for fans of metal that is heavy, crunchy, technical, intelligent, and in your face. Prepare to be blown away by the metallic force that is Bloodline Severed!

Progressive death metal from the States! This is the band's 3rd release! …

CROWNED IN SORROW: In

PRE-ORDER! MORE COPIES ON THE WAY! Here is a great new doomy death metal band from the US, or …