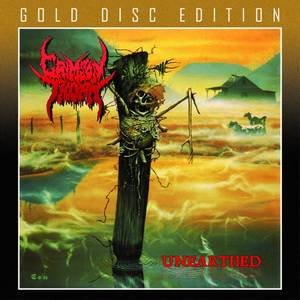 GOLD CDs
The advantage of the gold reflection layer is its increased resistance to corrosion, in contrast to the ordinary aluminium layer found on normal compact discs. Due to concerns over the incidence of CD rot on early CDs, gold CDs
were thus seen as a potential solution.

"Compare any gold disc to its standard-priced silvery cousin, and the golden one will invariably seem richer, deeper, clearer -- better. There are plenty of audiophiles willing to pay extra if it means they'll get more from the recordings they love."


Crimson Thorn is well-known as the Christian Cannibal Corpse. A must-have for people who dig brutal death metal and the low-low growls. This album literally includes a liner note warning that no effects were used on the vocals! From beginning to end the blast beats, double bass assaults, guttural growls, and multi-molten death metal fury never lets up! Limited to just 500 copies, get your Gold Disc Edition / Metal Icon Series pure guttural death metal while you can! Remastered by Bombworks Sound, 12 page booklet, and includes the original Plagued Demo as an added bonus.