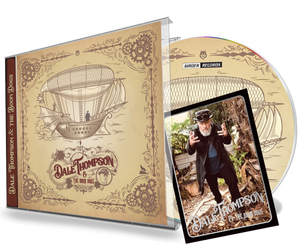 The Debut album from Dale Thompson (Bride) and the Boon Dogs is explosive and raw metal blues along the lines of a Led Zeppelin, Jimi Hendrix, Deep Purple and Motorhead. What many love most is Dale is his ability to whale and scream at a fever pitch that few artist even dare emulate. However, make no mistake about it, there is a message here that’s as strong as the music.

For those of you that might be that familiar with blues, the twelve-bar blues is one of the most prominent chord progressions in popular music. The blues progression has a distinctive form in lyrics, phrase, chord structure, and duration. In its basic form, it is predominantly based on the I, IV, and V chords of a key all of which Dale has seemed to master. Sure, Dale is most well-known for his vocals in his metal band Bride. But what I love the most about Dale is his ability to bring it in a big way on bluesy metal songs such as Rock Those Blues Away and even some of the bluesy elements of Hot Down South Tonight as well as a few other songs. He has the ability to whale and scream at a fever pitch that few artist even dare emulate.