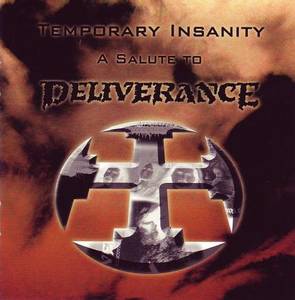 "Roxx Records and the Christian Metal Realm are very excited to announce the details on their long in the works, highly anticipated tribute album celebrating the 25th Anniversary of Southern California Christian thrash legends Deliverance! Temporary Insanity  A Salute to Deliverance is set for release this August and hosts a variety of artists paying tribute to the band, some current, some past and even some special reunions all came together to lay down tracks for the disc! Including current and former members of bands such as The Crucified, Vengeance Rising, Deliverance and Hirax just to name a few. And special reunions from Oil and Eternal Decision all coming together just to contribute tracks for this project!" -Roxx Records
Tracks