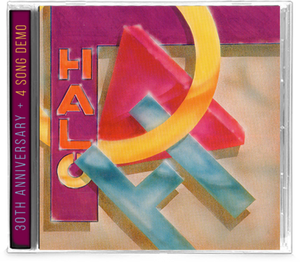 HALO 4-SONG DEMO - The Release now includes the bands 4 song Demo that was recorded at Bob Hartmans (Petra) Studio that got the band signed to Pakaderm Records.  This 4 - Song has never been heard till now.  It includes the songs GUT FEELING (No, that's not a typo), SING and both versions of Language Barrier.  The long version and the short (Radio Airplay) version.

A bulldozer is equipped to push large quantities of dirt, refuse, trash and rocks.  When you listen to the 1990 debut of Halo, it feels like a bulldozer of hard rock ready to bully and push through darkness and despair.  That’s what fueled HALO (HEAVENLY ANGELIC LIGHT ORCHESTRA) to tour non-stop in order to reach people with the good news. With angelic AOR choruses, relentless and driving guitars, and a tightness you could only expect from a band together for a decade, the debut Halo album checks all the boxes for a classic that transcends any rock and roll era.

The band launched way back in 1980, and were together for close to a decade before a chance meeting at a Petra concert.  Bob Hartman (Petra) was not supposed to have time to meet Halo. Providence intervened, and the band handed Bob a cassette with some music. The band would later get an infamous call from Bob Hatman (Petra), who invited them into his home studio to record a 4-song demo, later presenting it to John Elefante of Pakaderm Records. This debut album would wow fans of AOR and classic rock as the perfect fit for fans of Def Leppard, Journey, Petra, Whiteheart, Giant, and Mastedon!

Pakaderm released some of the greatest AOR melodic rockers, such as MASTEDON, GUARDIAN, FEAR …