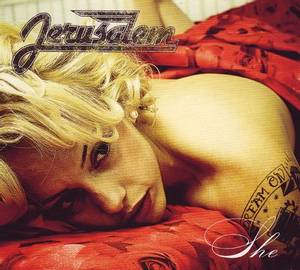 Jerusalem is not just another rock band! Especially in Scandinavia but even worldwide, this is one of the most classic Christian legendary bands. They were extremely radical, too radical for secular festivals and waay to radical for many churches that couldn't handle rock 'n roll. This is the first album from the band with new songs in 16 years and the band today consists of: Ulf "Uffe" Christiansson on vocals and guitar, bassist Peter Carlsohn and drummer Mikael Ulvsgärd. The 2 last been in the band since the Warrior album from 1981! "SHE" is the story of a world lying and turning it's back on the Lord and in need of love and forgiveness. The music is modern hard rock more guitar based than before!