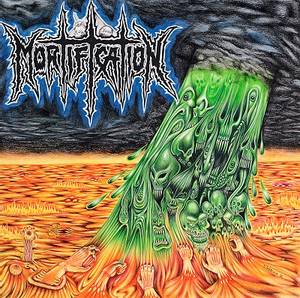 With releases on label giants like Nuclear Blast and Metal Blade, albums which are considered classics, world tours and a sound that is constantly being reinvented – having delved into death metal, grind, thrash, power metal, groove metal, classic metal and even a touch of punk – Mortification is a band that cannot be put in a box. They are the undisputed pioneers of Christian death/thrash metal and Australia’s most successful metal band. Heavily influenced by the thriving thrash scene of the early 90’s, this album is recommended for fans of Vengeance Rising, Kreator and Destruction.

Using the original “lake of fire” front cover art, this 2020 jewel case version also includes 5 bonus tracks and an all-new layout – a 12-page booklet with lyrics, alternate cover art, photos, articles, flyers and an album history written by Scott Waters (Ultimatum/NoLifeTilMetal). This edition is a must for fans of this legendary Aussie band and any true metal aficionado.