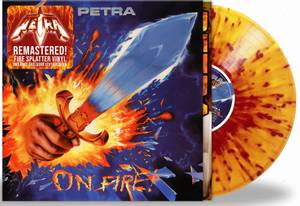 On Fire!, originally released in 1988, is by far the heaviest of all Petra albums with the exception of Jekyll and Hyde.  A true hard rock masterpiece if there ever was one. On Fire! was nominated for a Grammy™ and won a Dove award for their music video. It was also the first album to include their new bassist, Ronnie Cates.  It was PETRA IN THEIR PRIME and deserving of all the awards bestowed on them by the critics and fans.  After This Means War dropped in 1987 with such success, no one would ever go on record saying that Petra would be able to top it. That thought would have been ludicrous.  But the band, engineers, and producers had other plans, forging an entirely new album that would go down as one of the band's all-time great albums, and for most, their absolute favorite.  As much as this album rocks, it also checks all the boxes for a spiritual warfare attack on the kingdom of darkness. Make no mistake about it, this is one album that is a threat to the enemy or anyone that thinks that Petra won't go down fighting. They were absolutely on fire (pun intended). It's a true representation of what a rock album should be. Just one listen and you'll quickly understand why Petra was everyone’s favorite Christian Rock band.

Remastered from original sources with an 8-page booklet with lyrics in a jewel case. It also comes with a very special flaming LTD collector’s card inside.