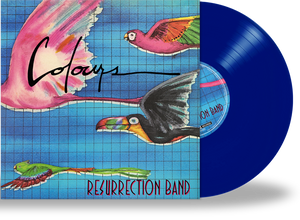 In stock and shipping!

Resurrection Bands’ Colours (1980), Mommy Don’t Love Daddy Anymore (1981) and D.M.Z. (1982) are 3 of the most iconic Christian rock albums of all time. They have been completed re-mastered and restored from original sources and are now available on vinyl, for the first time in 40 years. Each one comes in high-quality gatefold with historical photos, lyrics and a liner notes, written in 3 parts; one in each release, by none other than John J Thompson (True Tunes). All 3 also include a large 24” x 24” band poster and come in different colors

Colours is considered by some music critics to be one of the band's defining works.

Colours was Resurrection Band's first release for Christian label Light Records, which had up to this time been known as the primary record label for Andraé Crouch and similar gospel artists. Colours is also considered by some music critics to be one of the band's defining works.

Colours begins with the powerful Autograph,' which opens with a full two minutes of exciting guitar riffs before Wendi weighs in with her Grace Slick vocals. The album's title track is an offering of worship that concludes with the poetic refrain, *Whatever one could ask of faith, obedience will give / Together all express the love in hearts where Jesus lives." "N.YC." describes the harsh urban life in the mean streets of Chicago's big sister city, but 'Amazing" expresses wonder at the hope and help God offers those who are metaphorically or literally homeless. "City Streets" and "Beggar in the Alleyway" continue the social consciousness, an attribute of Resurrection Band's albums almost totally absent from other mainstays of Christian music at the time. American Dream" predicts an apocalyptic nuclear holocaust: It will happen / Just don't think about it!" It is significant for being the first of many songs that Resurrection Band would write about the moral rot at the center of America's political and media culture, indicating a much more progressive political worldview than most Christian musicians would dare sing about at the time. Overall COLOURS embraced a more radio-friendly hard rock and sound with this album, which is a mix of personal reflections on God's sovereignty and love.