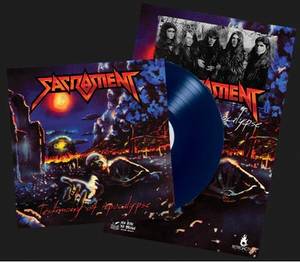 Sacrament was an intense East Coast Christian thrash metal band that pushed the boundaries of early death/thrash metal, not unlike Kreator, Sacrifice or Death. The music is fast and furious leaning towards the more extreme European thrash sound, as opposed to the Bay Area style. Vocalist Mike Torone has a raw, coarse, throaty voice that adds to the overall extreme vibe of the music, though he never really dives into full on death metal growls. Despite the speed and intensity of the music, Sacrament does not forsake memorable songwriting. "Conquer Death," is a full-throttle thrasher with a manic vocal delivery, one sick high-pitched scream, and a bridge with a killer groove that gives way into a mid-paced lead break. Originally released in 1990 on R.E.X. Records, Testimony of Apocalypse became an instant favorite with thrash fans. Songs like "Slave To Sin" displayed beefy thrash guitars and classic thrash vocals used to create an abrasive wall of sonic power - all coming together to create some of the finest examples of Christian thrash metal anywhere! This 2017 Vinyl Edition comes completely remastered by J. Powell at Steinhaus giving this Christian thrash classic it?s best sound yet! Limited to 300 copies (100 Blue Vinyl & 200 Black Vinyl) get your copies while they last! Also available via Retroactive Records (2014) on CD (remastered, digipak).

A1 Testimony Of Apocalypse

A2 Slave To Sin

A5 Valley Of Dry Bones

B3 Absence Of Fear

This was to become the band's second and sadly last album, originally released in 1992. It is more …

Originally released in 1992 on the legendary R.E.X. label and was being hyped as the heaviest disc …