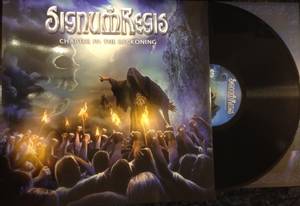 "Band founder Ronnie König comments about the new album: “It was the plan since get go, to make our best album so far. After releasing the EP earlier this year, it was clear that the bar was set pretty high. We worked very hard and we believe that we managed to lift the bar even higher in every aspect. Some of the songs on the album will become the classics of Signum Regis, that's for sure. There will be 10 new songs on the album, none of them appeared on the EP, which makes both the album and the "Through The Storm EP" a good buy for the fans.”

This vinyl edition is strictly limited to 300 copies worldwide. Includes an insert with lyrics.