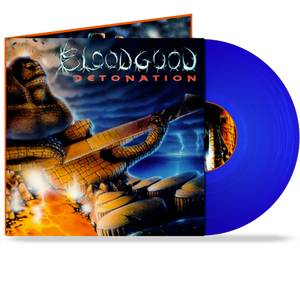 It's been over 30 years since Bloodgood dropped their sophomore album and arguably on of the greatest Christian Metal albums of all time and nearly every best of list agrees.  Heaven's Metal ranked it at #8.  YES, number eight!!! Above Bride Snake in the Playground. It's that good.  And now it completely remastered by Rob Colwell it comes in a gatefold jacket that opens up to iconic band pictures and includes a  large 24" x 24" band poster with full color 2-sided inner lyric sleeve with lyrics and credits. It's also available in 2 colors. 100 units in translucent blue and 100 units in lava-fire-orange.

This is also been remastered by Rob Colwell of Bombworks sound. Mastered specifically for vinyl.  When you remaster for Vinyl is a completely different process than CD.   The goal is always to let the vinyl breathe and no push the decibels to high.  That's what gives vinyl such a warm, rich, deep sound.

These Bloodgood releases are not only two of the best Christian metal albums to come out of the 80's the are also are top shelf elite re-issues. Gatefold designed with posters. No mini posters here. These are 24" x 24" in other words when you pull them out you have to unfold and unfold again. For too long in the music industry the Christian rock releases were always second to the secular mainstream.  Not any longer. I am going to make sure of that. This are done at the highest level. Completely remastered colored splatter and marble. No question about it, these are the best possible release that could be done.  No missing songs, no missing lyrics.  YOU GET EVERYTHING and at top notch quality.  Promise.    I wanted these to last the next 20-30 year and still be able to pull it out and be proud of it.  This band deserves it and so do you and I.  So join me in celebrating history of 2 of the best Christian metal albums of all time.

Les recently stated "This is the album where we went to the record company and said let us (the band) produce this album and we will deliver you a great metal album. We were the writers, the arrangers and the producers. Yes, we had an engineer (Doug Dole), but we (the band) wrote all the songs and oversaw the entire mix. We locked ourselves into a warehouse and worked all day long, every day until it was complete."

Dave Mustaine (MEGADETH) did a review of Detonation in Circus Magazine which discussed the relevance of a Christian Metal album and how Bloodgood did everything correct.

What really surprising is how well this record still holds up. So many bands back in the day used reverb on everything and listening to some of those now, sounds a bit outdated and hokey, yet Bloodgoods' Detonation still sounds fresh and new. Les's voice is at it's peak which thankfully also stands up to todays' rock vocals.

ABOUT THE ALBUM As majestic, haunting, and truly authentic as Bride has ever been. Long …