Hjem » CD » CD - pop/rock/alternative » ED RAETZLOFF: It Took A Long Time To Get To you CD *PRE-ORDER 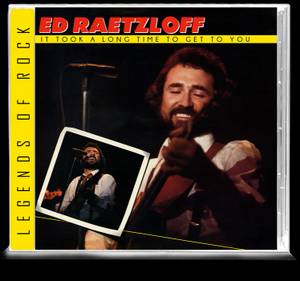 Ed Raetzloff, with his group Blue Jug, played with some of the nation’s finest — Lynyrd Skynyrd, Allman Brothers Band, Charlie Daniels Band. Ed was doing it all, till one day his commitment as a Christian was tested. Ed’s response, in the middle of a contract meeting, was to stand, tear up his contract, and walk out saying, “I’ll either do it for God, or I’ll not do it.” That commitment has not brought him instant joy or fame, but instead some suffering and pain. This album is a testimony to that commitment. A commitment not only to the Lord but also to a style of music. I call it Jesus music. It lifts up the name of Jesus, it praises the name of Jesus, it brings glory to the Father, and it rocks!

In 1980 this Christian album "It took a long time to get to you" came out of nowhere. One can confidently classify the album under Southern Rock. A year later his second album "Drivin Wheels" was released for the CCM market. Both album contain some of the best, blazin' blues guitar and southern rock.

This album does not come with a trading card and it was ripped from vinyl as original sources are not available anywhere. However you are going to be pleased.  After many painstaking hours this is cleaned up to near perfection sounding as if it came right from the master reels.  Just take a listen.