SLECHTVALK: The War That Plagues The Land (LP) 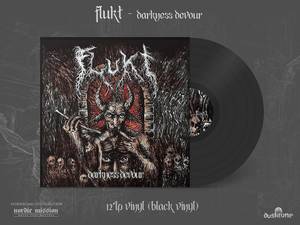 FLUKT is a raw oldschool Black Metal band hailing from Vennesla, Norway. The band was launched during the fall of 2014 but from the dark mood and the aggression in the music, every metalhead will get a flashback to the good old days of Norwegian Black Metal in the 90s.

Their debut Ep «Holocaust» was released through SkyBurnsBlack Records in the winter of 2015. Late november 2017 the seven inch vinyl single «Fortapelse» was released by NordicMission Production.

Flukt has performed several live shows in Norway and Sweden. Like on the legendary Inferno Metal festival in Oslo, NordicFest and at the John Dee club.

Flukt perform harsh and cold Norwegian Black Metal. The music has clear reference to the oldschool Black Metal sound made infamous by the Norwegian Black Metal scene in the early 90s. The music is aggressive and have a violent drive where the main focus is to create atmosphere. The unique thing with Flukt is the way dynamics is approached. Even when the music is fast, and harsh. Flukt is never afraid to mellow things down in slower passages and more groove oriented songs.

PLEASE NOTE: PRE-ORDERS WILL BE SHIPPED WHEN ALL ITEMS THAT YOU ORDER IS IN STOCK. ORDERS WILL NOT BE SPLIT INTO SEVERAL SHIPMENTS

First time on LP, BLACKVINYL limited to 230 copies! Nordic Mission is VERY proud to present a …