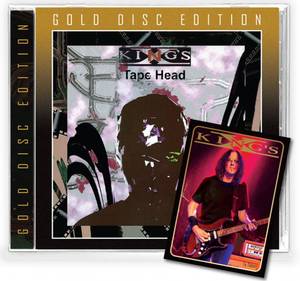 ABOUT THE ALBUM
The band's 1998 magnum opus, "Groove Machine" launches the album like a rocket ship on it's way to outer space!  Full of molten metal, and grooves so heavy it's been known to cause kryptonic drooling!  For many, this album is a triumphant return to the classic King's X sound, while still exploring new territory for a band unwilling to stay the same, and thankfully so! The album flows with the perfect mix of heavy groove and melodic sensibility, with no shreds of the early prog-ish King's X sound. The songwriting is excellent on this album, as expected. The musicianship is elite, with perfectly placed guitar fills, basslines, and of course the signature vocal harmonies. Can it get any better? This is classic King's X with no restrictions, no producers, and no record labels driving them for the next radio hit. This is straight up King's X, very neat, and it goes down ultra-smooth.  Indeed - this is top shelf stuff.  Compared to Ear Candy (also brilliant), Tape Head is a monolithic slab of epic proportions. Now the album get's the deluxe Gold Disc treatment with an expanded booklet with lyrics and additional band pics. Also included is the Japan-only bonus track, "Two." And, every CD comes with an exclusive King's X foil-stamped collector's card! Indeed - it's time to upgrade the stereo in the car - and turn it UP!  Welcome to the GROOVE MACHINE!