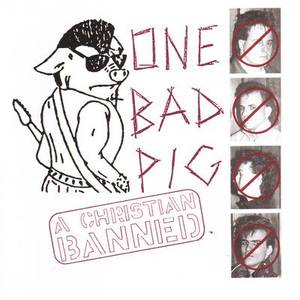 A rare collectible. This album by those fun and lovable punk thrash unit One Bad Pig is a six-song, self-produced independent demo from 1986. What we got here is the Pig in the raw, with three songs that found their way onto future Pig releases, and three that were left on "A Christian Banned" (until, of course, their resurrection on the best-of disc, "The Quintessential One Bad Pig").

Here's the song line-up: "6," which morphed into "Isaiah 6" for their debut "Smash." and is basically the dialogue between Isaiah and the Lord found in Isaiah chapter six; "Sleepin" With The World", an early example of the Pig"s talent for making their songs mini sermons; "Make Me Burn", also an example of the emphasis One Bad Pig makes on praise and worship; "Blow And Go", which found a second life on "Smash" as well; "Anarchy Is Prison", later known as "Godarchy" on, once again, "Smash"; and "Life"s A Bomb," showcasing an early lean toward alternative shown on later albums "Swine Flew" and "I Scream Sunday." Good demo from a great band. And highly collectible.