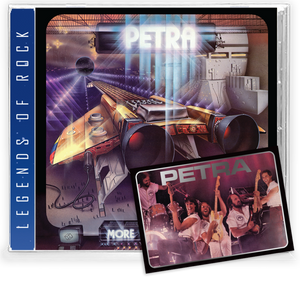 More Power to Ya was Petra's fifth album and the album that changed everything. Previously sounding similar to Lynyrd Skynyrd and The Eagles, with some laid
back Southern Rock vibes, Petra had been working out the bugs to perfect apolished progressive-rock sound. Petra finally crafted a style that could easily lock
horns with anything on the industry charts. More Power to Ya rivaled mainstream albums by groups like Journey, Boston, or Styx in style and sound, but brought an
unabashed message of encouragement to Christian listeners. Their new progressive(ish) rock sound began receiving attention from the mainstream
music industry. BILLBOARD dubbed More Power to Ya a "Top Album Pick"

Christian radio had a field day with the title track, while rock fans thrilled to the stripped-down riff (and creepy backwards message) of “Judas’ Kiss.” “Rose
Colored Stained Glass Windows” dared to challenge complacency within the church, while “The Road To Zion” struck an epic, almost Zeppelinesque tone both
lyrically and musically. More Power to Ya checked all the boxes, rose to even higher sales levels, and saw Petra become one of the biggest touring acts of the
80’s

ABOUT THE REISSUE
Although this album was released nine years ago as a 25th Anniversary Edition in 2012, it lacked the punch, low-end, and definition that remastering now affords,
leaving fans wanting more. But now in the hands of Rob Colwell, it is truly a masterpiece and sounds new, fresh and somehow relevant, again.
Bob Hartman – Guitar
Greg X. Volz – Lead vocals
John Slick – Keyboards
Mark Kelly – Bass
Louie Weaver – Drums