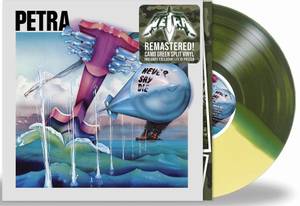 Christian Rock's #1 band, PETRA, is louder, crisper with more definition, punch and attitude and finally get the credit they deserve.  Never Say Die (1981), Not Of This World (1983), Back To The Street (1986) and On Fire! (1988) have been remastered for vinyl from original sources and are back on vinyl for the first time decades. All 4 of these classic Christian rock releases are printed on heavy weight vinyl in a special effect/color combination, includes a 12"x18" poster and includes 2 sided printed inner sleeve with lyrics and photos.

Originally released in 1981. Something happened between 1979 and 1981.  Petra's 4th album Never Say Die took a turn to very AOR/Def Leppard-ish like approach compared to the softer approach of Washes Whiter Than, dropping rockers like “Chameleon,” “Angel of Light,” “Without Him We Can Do Nothing,” “Father of Lights” and “Praise Ye the Lord.”  It became very clear that this band was headed for Christian Arena-Rock Stardom, leaving the classic mellower style behind and forging a new path towards 80's epic Christian rock band status and success that few bands enjoyed. You'll understand after listening to it how Petra went from hand to mouth to become Christian Music's first stadium rock band and indeed the genre's first supergroup putting on a show like Styx or Kansas traveling with a stage set-up that required 3 semi-trucks. This album is the all-out assault on the forces of darkness.  Yes, it was militant like, and yes we all officially enlisted in God’s army after hearing it.  From the graphics to the lyrics, to the stage set-up, Petra officially waged war on the enemy but also on the complacency of a Christian band that just wanted to rock, and rock they did. Only getting better with each and every album.