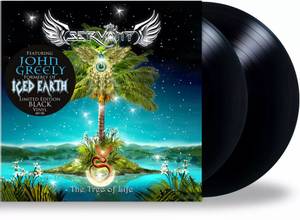 The time has finally come and this one has been in the making for almost 15 entire years! When John Greely started to envision his magnus opus release “The Tree of Life” he had no idea this one would become such a long endeavor. It was in 2006 when John started working on developing this very special project, he would bring to the fold many seasoned players to get this one just right. And now it has fully come to fruition, we bring you the first full length masterpiece by Seventh Servant.

Seventh Servant is the brainchild of former Iced Earth (Night Of The Stormrider) vocalist, John Greely. In 1992 Iced Earth released their classic Night of the Stormrider album. Greely would go on to play in a plethora of bands, always striving for a level of metal integrity in his music that most bands in the power metal genre lacked. All of this experience would lead Greely to this project, Seventh Servant! This debut release from Seventh Servant is more than your average metal release, this release is poised to bring the book of Revelation to life in a way that you have never heard it before.

Roxx Records is very excited to be teaming up with Seventh Servant to bring you one of the most anticipated releases of 2022 with their magnum opus release entitled “The Tree of Life”. Slated for release this September, “The Tree of Life” will be released in a beautiful 2 LP gatefold edition, with beautifully designed artwork, containing full lyrics on a very limited colored vinyl, as well as a black vinyl version. The release will also come as a 2 disc Limited Edition CD version, disc 1 will feature the whole brand new album, while disc 2 will feature the complete album in a completely voiceless, instrumental edition. Lastly, it will also be available at all of your favorite digital and streaming platforms.

As we get ready to unleash this monster of an album for the world to hear, at such a critical time in our world, we invite you to hear the debut single from “The Tee of Life”. “Jezebel” is the debut single now being serviced to radio, be sure to call in and request it wherever you listen to your music. This single needs to be heard and we invite you now to hear the debut lyric video which also features guest vocals from the one and only Tim “The Ripper” Owens (Judas Priest)

SEVENTH SERVANT: The Tree Of

The time has finally come and this one has been in the making for almost 15 entire years! When John …