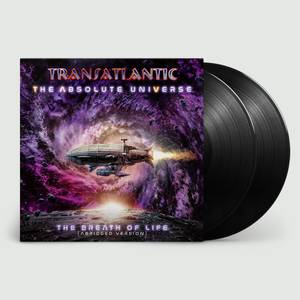 Transatlantic have never been a band to resist a challenge. So it should come as no surprise that for their fifth album 'The Absolute Universe', Neal Morse Roine Stolt Pete Trewavas and Mike Portnoy have really gone out to do something a little unusual. "We have actually come up with something unprecedented," says Portnoy proudly. "We've got two versions of this album. There's a two CD presentation ('Forevermore'), which is 90 minutes long, and a single one ('The Breath Of Life') - that's 60 minutes. The single CD is NOT an edited version of the double CD. They're new recordings. What we have done are different approaches to the songs for this! We wrote fresh lyrics and have different people singing on the single CD version tracks as compared to those on the double CD. We revamped the songs to make the two versions different. "For this record, the band have also returned to the concept album format: "What we have is essentially one giant composition, split into chapters. The storyline is about the struggles facing everyone in society today" comments Portnoy. "We didn't start out with the idea of this being conceptual," admits Stolt. "The way things work with us is that we have a load of ideas, and these are developed spontaneously when we meet up. Everything happens in the moment." For Trewavas, 'The Absolute Universe' is a momentous project. "I think it is right up there with the very finest albums we've done.

Following the release of their brand new fifth studio album 'The Absolute Universe', …

Following the release of their brand new fifth studio album 'The Absolute Universe', …

Re-release of their 2nd masterpiece album of progressive rock/metal! …

Transatlantic have never been a band to resist a challenge. So it should come as no surprise that …