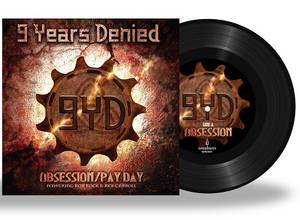 Soundmass are pleased to announce the release of their first 7” vinyl: “Obsession/Pay Day” by 9 YEARS DENIED – a music project created by producer Scott Moore. With special guests like Rob Rock, Rex Carroll and more, you will want to read on…

There’s an interesting story behind the song “Obsession”. Scott originally wrote it in high school back in 1987. Having just heard supergroup Project Driver, he wrote the song with Rob Rock’s vocals in mind. Fast forward a couple of decades and Scott befriends Nashville producer Michael Wagener (who has worked with the likes of Metallica, Skid Row, Dokken, Ozzy, etc). In 2011 he asks for Michael’s help to record a song that would sound like it might be on a hard rock radio station in the 80’s and then played him a demo of “Obsession”. When asked who would sing on it, Scott told him he had Rob Rock’s vocals in mind when he originally wrote it. Michael, who had mixed Impelliteri’s “Eye of the Hurricane”, picked up his phone and said, “Well, let’s ask him.” 5 minutes later Rob Rock was booked! Scott recorded the guitar and bass tracks, Rob flew in to lay down the guest vocals, Michael mixed it and in 2012 “Obsession” was released worldwide as a digital single.

Fast forward another decade and in 2022 Scott pens the song “Pay Day”, a straight-ahead hard rock anthem that brings back memories of bands that have gone from the sunset strip to arenas. This time around Scott shared the guitar riffage with guest Rex Carroll (Whitecross, King James, Fierce Heart) – “I love the song, playing guitar on this was a kick in the pants! Congrats Scott… let’s go!” JR McNeeley, who started off at Pakaderm Studios and has worked with numerous artists since (Guardian, Demon Hunter, etc.) both mixed and played bass on the song. And finally, Stayce Roberts from The Brave was brought in to perform the guest vocals. Stayce completely expanded Scott’s vision for the song, also layering all the lush background vocals to make it larger than life.

With artwork by (Rob’s wife) Liza Rock and mastering for vinyl done by Paul D. Clifford at PCP Studios, this is the first time these songs have been available in a physical format. With only 250 copies pressed, don’t deny yourself a copy for too long!

TRACK LISTING:
Side A
Obsession

Side B
Pay Day