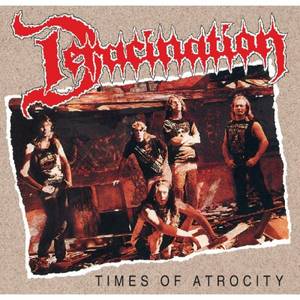 “Dark Symphonies is proud to announce our cooperation with Christian death metal act DERACINATION to re-issue their ultra-rare, highly sought after self-financed 1992 CD Times Of Atrocity. As a bonus we will be including the band’s equally rare 1993 demo. Almost 80 minutes of full-on, in-your-face, crushing death/grind metal bringing to mind early Mortification and Living Sacrifice. Last, we will include a bonus CD with the band’s pre-DERACINATION thrash metal incarnation HOLY RITE – Mosh For The Master. In 1989 Holy Rite was formed with a desire to play music together with the band’s influences of heavy metal and thrash. The band had a desire to play loud and heavy with lyrics that had a positive message, being Christians in a band but not out to preach to people. They changed the name to Deracination as another band was using Holy Rite and recorded their debut CD as Deracination at Machine Head Studios which is no longer in operation. When it came to the end of recording they ran out of money and this had an affect on the end result as it was never mastered or properly mixed and, with the limited technology of the early 90’s, they weren’t able to fix the problems with the recording, but it was still quite well received. During their Australian tour and release of the album, 2 members left the band due to personal reasons. With a new line-up, it also changed the direction of the music to a much darker heavier sound which led them to record their final cassette tape Deracination, which was never released on CD. Only a very small amount of 250 were made.” -Dark Symphonies

Disc 2
Holy Rite: Mosh For The Master
Word Of God
The Edge
Accept And Repent
Mosh
Hold Me Now
The Storm
Or You Will Die

Oldschool death metal the way we remember it. Raw and ugly, yet sublimely beautiful! Produced by …

RED INK: The World After CD