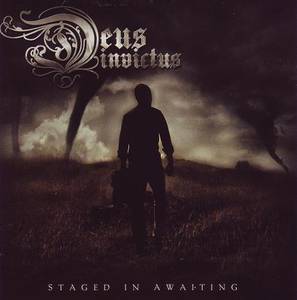 Deus Invictus storms the metal scene with their masterful debut Staged In Awaiting. Deus Invictus hails from the Atlanta area and serves up a 7 course meal of extreme metal that will only cause you to keep coming back to the table. A 10,000 foot view description might describe the band as progressive thrash which, though definitely an accurate description, is only beginning to scratch the surface. Imagine if Burial and Undeceived era Extol got back together, got married to the heavier side of Dream Theater, went out regularly with Believer and Tourniquet and occasionally went Necrophagist brutal on you. Now the onion is getting peeled back further, but we still haven't truly captured the sound of Deus Invictus. The band deftly blends thrash, death and grind with crunchy progressive metal, while retaining an organic sound throughout. The guitars are absolutely crushing at times, while at other times they just hypnotize you into a trance before ripping your head off again. The vocals are mostly extreme in nature, but there is a good helping of thrashy melodic vocals as well that hearken to Dream Theater and Tourniquet. The melodies throughout are addictive and memorable and the guitar solos and leads are nothing short of terrific. The drumming is also absolutely top notch - very tight, seamlessly going from fast to slow, always retaining a very technical edge that few drummers can pull off in the studio much less live (Jeff Carter, who many will know was the original drummer for The Chariot, can do both). Holding true to its progressive tendencies, the album itself is also nearly an hour of music and follows a theme of storms and how they relate to your journey in life. The production is absolutely stellar and the artwork is amazing and matches the theme and professionalism of the album. Fans of any of the aforementioned bands as well as those into thrash, death, grind and heavy progressive metal will savour each course of this delicious metal feast. It isn't often that a genre-defining album is released and Staged in Awaiting certainly has the potential to be that album. Feel the Rain of God and thrash your head off to the wonder that is Deus Invictus!"
Tracks