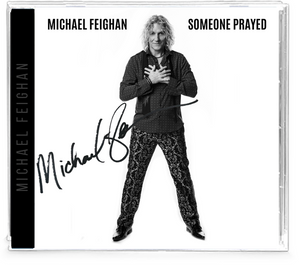 If you're a Whitecross fan please support this.  It's not metal, but it is one highest quality contemporary rock CDs I've ever heard. The production on this is top-notch.  Usually artist get it wrong and do their first album on the cheap but this is everything you would hope, but most artist don't do.  If there was ever an album worthy of your support, this is it.  This guy is going places.  I know Michael personally and I can tell you he is one of the most humble and best quality individuals I have ever met.  I sure wanted this album to be done right... and it absolutely was. Produced and co-written by  Matt Bissonette (Elton John) Drums by Gregg Bissonette (Ringo Starr )Grammy-winning engineer Chris Lorde-Alge(Bruce Springsteen, Tina Turner, Tim McGraw)

Solo artist Michael Feighan transitions into the contemporary rock genre with the upcoming release of his first album, “SOMEONE PRAYED”, offering a message of hope and redemption.

Michael’s music career began as a drummer with the band, Whitecross, which took him across the United States, South America and Europe and included winning several Dove awards. Michael later played on the Gotee label with the band Curious Fools, as well as with Oz Fox of Stryper, Guardian, B. J. Thomas and others before entering the vocalist arena.