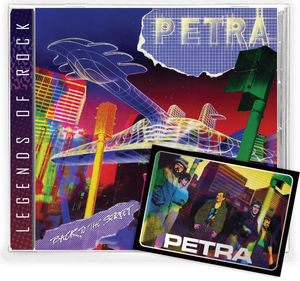 Petra - Back To The Street

Very few bands have had more than one lead singer in which the later singers saw as much, if not more, success than the previous. Those exceptions would be Sammy Hagar of Van Halen, Brian Johnson of AC/DC, Dio with Black Sabbath and John Schlitt with Petra.  Back To the Street, John's first album with the band and their 8th overall album, gave PETRA new life and even more success than they could have dreamed of garnering a Grammy™ Nomination for best Gospel Group (1987) and a long line of Dove Awards and Grammy™ Awards to come.  When you start this strong you are either doomed for failure or as in John's situation, you have something to prove.  The band was stronger and tighter thanks to the work of producers John and Dino Elefante, who demanded excellence if they were going to stamp their name on it. Petra fans were delighted. Melodic Rock with guitar hooks, catchy lyrics, soaring vocals, AOR ear-candy like no other. The new vocalist fit like a hand in a glove.  It was strong musically, and powerful lyrically. Everything about this album just worked.

Everything that can be shakin' will be shakin' within, better have your house in order when the shakin' begins. (From the song “SHAKIN THE HOUSE.”)

Remastered from original sources with an 8-page booklet with lyrics in a jewel case. It also comes with an LTD collector’s card inside.