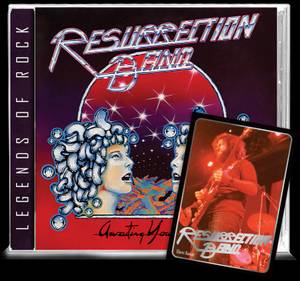 This Girder Records Legends of Rock™ release come in a jewel case with multi-page booklet insert that includes readable lyrics, photos, liner notes. It also comes with a special LTD edition collectors trading card sealed inside, limited to only the first pressing.

Resurrection band was not just one of the early founders of Christian rock and early Jesus people music they were also the leaders behind (JPUSA) Cornerstone Festival which so many of us came to love and appreciate not to mention attend every single year. Those years were magical and nothing was greater that watch Rez play on main stage over the 4th of July weekend. It's something we all looked forward to every single year.

Resurrection band is the most influential band in Christian music history.  Rarely do you hear Resurrection Band get compared to any other band. They clearly found their own sound and didn’t worry about following in the footsteps of anyone else.  Glenn and Wendy Kaiser along with Stu Heiss, Jim Denton and John Herrin simply knew what they were after, to spread Gods' love through music and ministry.  Pure unadulterated Jesus Rock at it's finest.