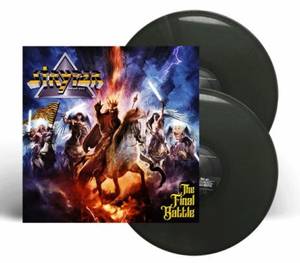 Legendary, long-running heavy metallers Stryper are set to return with a brand new studio album, "The Final Battle"! Firmly continuing the trend established over their last few albums, "The Final Battle" sees the band growing heavier while also maintaining their trademark melodies, virtuoso guitar playing, and air tight rhythms.
"The Final Battle" was crafted during the most challenging time of the band's career. While they suffered the same setbacks faced by all artists during the course of the global pandemic, the band also had to contend with Oz Fox's ongoing battle with brain tumors and for Michael Sweet, a detached retina which required multiple medical procedures, the use of an eye patch, and limited mobility for stretches of time. But rather than let the adversity get them down, the band accepted these challenges and channeled it into writing some of the greatest songs of their storied career.
Defying all logic, "The Final Battle" somehow manages to best it's immediate predecessors, "No More Hell To Pay" (2013), "Fallen" (2015), "God Damn Evil" (2018), and "Even The Devil Believes" (2020), continuing the band's unprecedented late career streak of releasing arguably the best albums of their multi-decade career. How do they do it? Well, we may never know the answer, but we can be thankful that the gift of musical inspiration continues to find them as they consistently share their musical fountain of youth with heavy metal lovers around the globe.
When it comes to groundbreaking bands in the metal genre, Stryper is renowned for their distinctive brand of “heavenly metal,” extraordinary crossover success, and venerable endurance. The group ascended to prominence in the 1980s with Billboard Top 40 hits like “Calling on You,” “Honestly,” and “Always There for You” and had maintained a global fanbase since. Stryper’s career album sales exceed 10 million worldwide, including 1986’s multi platinum release “To Hell with the Devil.” The band also made history when it notched two songs simultaneously in MTV’s Top 10 with videos “Free” and “Honestly.” While Stryper is known for their Christian faith, their decades plus career in heavy metal has made them much more than just a ‘Christian metal’ band. Sure, that is part of who they are, but at the end of the day, they are simply a long-running and well respected heavy metal band with a late-career rebirth that has proved their enduring talent and musical skills are well intact.
Today, some 37+ years after emerging from the southern California nightclub scene, the foursome continues to record, tour and perform for loyal fans around the globe. Comprising three original members including brothers Michael Sweet (lead vocals, guitar) and Robert Sweet (drums), Oz Fox (guitar) and newest bandmate, seasoned bassist Perry Richardson (formerly of Firehouse), the group finds itself creating their finest, most powerful music yet.
-777-

Frontiers Music Srl is pleased to announce the formation of an exciting new hard rock group, …