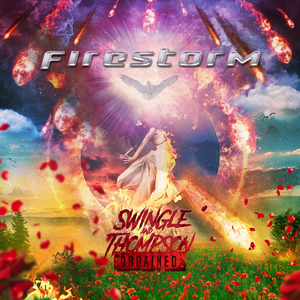 Roxx Records is excited to announce the sophomore release from Swingle and Thompson Ordained is on the way! That is right Randy Swingle and the one and only Dale Thompson bring you their second and even heavier release to the masses. The second album is called Firestorm and we can tell you it definitely is!

This One has a very powerful message as we are in the end times. This album will feature Legendary Christian Award Winning Songwriter Vocalist Of The Year Dale Thompson Of Bride Out Front On Lead Vocals. Legendary Christian Award Winning Guitarist Troy Thompson Of Bride Guesting On Lead Guitar On Christ The Destroyer. Christian Grammy Award Winning Hall Of Fame Lead Vocalist John Schlitt Of Head East/Petra singing with Randy Swingle on American Hero dedicated to Randy's Son In Law Cpl Francis Trussel Jr who gave his life in combat in iraq to protect our USA. Randy Swingle Rhythm Guitars Backing Vocals & Erik Nelson On Lead Guitars Bass Guitars & Drums

The first single Christ The Destroyer is about Christ our Lord destroying the works of the devil. Featuring Dale Thompson Of Bride on Vocals along with his brother Troy Thompson Of Bride On Lead Guitar as well as Mastermind Randy Swingle On Rhythm Guitars & Erik Nelson on Bass & Drums