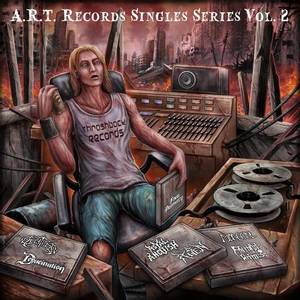 CLASSIC DEATH METAL FANS REJOICE! The second and final in this series limited to 300 copies only!

THE UNRELEASED... With this second (and final) volume, THRASHBACK RECORDS is pleased to bring you what was to be the second wave of 7” vinyl releases on the Florida based A.R.T. Records label. Three of these releases were splits with the concept being to present opposing styles within the Death Metal genre.

ROYAL ANGUISH / THE RISEN: This collection begins with two tracks that were exclusively recorded for the vinyl release. Florida versus New York style Death Metal is what’s on hand.

OBLATION / DERACINATION: Here we have Florida inspired Death Metal (by way of Texas) versus a Napalm Death influenced assault from Down Under. This version of “Death By Fire” was exclusively recorded for the 7” release and is far more brutal than the version on their debut album “Times Of Atrocity” that preceded it.

FINAL PROPHECY: The sole non-split release. Both tracks are exclusive 7” remixes. These remixes were not included on the "Re-Awakening" released which we licensed to Roxx Records in 2018.

This 2020 reissue features all 4 titles in their entirety, fully remastered by Rob Colwell of Bombworks Sound from the original DAT masters, and an 8-page booklet. This special release also features 2 bonus tracks, one each from Royal Anguish and Faithful Witness.