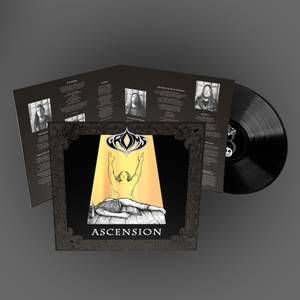 First time on LP, BLACKVINYL limited to 230 copies!
Nordic Mission is VERY proud to present a re-release and re-master of GROMS one and only album "Ascension" to be released November 15th!

Vinyl version is exclusively limited to 330 units, including 100 copies on colored grey vinyl and the rest on black. It contains a gatefold cover with all lyrics, and a huge 4 page booklet with pictures and linernotes written by Yngve Moum Jacobsen of Heavymetal.no, and both old and new thank-you lists.

1. Ascension
2. From Dust To Dust
3. True Wisdom
4. The Riddle
5. Truth Misunderstood
6. Noone
7. The End Of The Age
8. The Voice Of Righteousness
9. The Just Shall Live By Faith

These are the last original GROMS t-shirts from 1996! They are only available in one size, …

METANOIA: In Darkness Or In