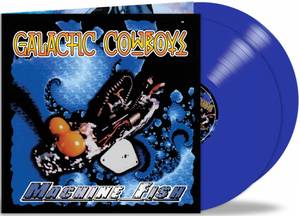 ABOUT THE ALBUM
The 1996 double masterpiece from the Galactic Cowboys features 2-LPs containing all of both Machine Fish & Feel the Rage EP in one package. Everything has been remastered to perfection by Rob Colwell of Bomwborks Sound and features deluxe Gatefold Packaging that collector's love (with lyrics!).  Gone is much the the silliness that defined the first two albums.  With the zaniness dialed down we are treated to some scorching rock with melodic multi-layered vocals. With the humor much more mild we can hear the ripping music more clearly. Highlights include: "Fear Not"; "Stress"; "Red Sun"; "Idle Minds"; "9th of June"; and "Arrow." This is a grown up heavy metal album that will melt your face into jellyjam!  Melodic?  Yes!  George Foreman sized hooks?  You bet!  Top-notch lyrics?  Absolutely!  Machine Fish is where the band pooled all their artistic potential and laid it into one single brilliant album.  In fact, they had more in their back pockets than one single album. The same year as Machine Fish they also released the Feel the Rage EP.  That EP is a continuation of Machine Fish - sort of a Part Two!  So both albums are included in their entirety for this 2022 Atomic Blue Double Vinyl release.  It is remastered and comes with a deluxe gatefold designed for the most diligent of collectors!  It features a 2022 remaster for vinyl by Rob Colwell of Bombworks Sound.  Two amazing albums in one single package of two LPs - limited to just 300 units - get this classic while you can!