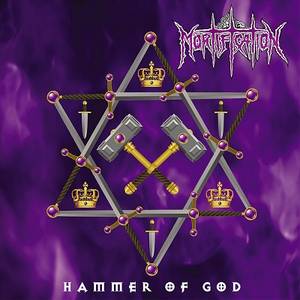 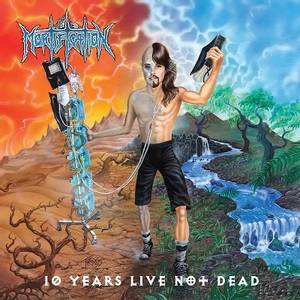 Hammer Of God (1999), their 8th studio recording, continued the collaboration between Nuclear Blast (Europe), Metal Blade (USA) and bassist Steve Rowe’s own label, Rowe Productions (Australia), which saw the album released far and wide. It also continued with their innovative hybrid of classic metal and thrash, with just a hint of death metal, as exhibited on the preceding Triumph Of Mercy and EnVision EvAngelene. The vocals are gritty, the guitar tones are superb, the riffs are powerful, the drumming is concise. The talent of Mortification in being able to craft catchy yet aggressive metal tunes is showcased in the album openers “Metal Crusade” and “Martyrs”, with the rest of the album following suit. For added value, we’ve also included 8 bonus tracks – 3 studio recordings and 5 previously unreleased live tracks recorded during European tours.

10 Years Live Not Dead was recorded in 1999 at Australia’s premier Christian music festival, Black Stump. They succeed in capturing the essence of a Mortification concert: you feel like you’re actually there in the crowd, enjoying the band live and raw along with a few hundred other rowdy fans. It showcases a solid three-piece and the live sonics add more heaviness than the studio versions of the songs being performed.

Remastered and with the cover artwork reimagined by Scott Waters (Ultimatum/NoLifeTilMetal), along with a dual-cover, all-new layout, this 2-CD edition is a must for fans of this pioneering Aussie band and any true metal enthusiast.