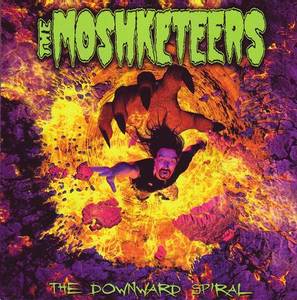 Originally formed in the mid 80s as a straight ahead heavy metal band and going by the name Rapture, the band released several demos, including Vacation from Hell and Die by the Sword. The band toured with Barren Cross and shared the stage with many bands including Deliverance and Sacred Warrior. The band would eventually change their name in 1989 to the Moshketeers which would coincide with the bands full transition in to the growing thrash metal scene! The Moshketeers independently releasing 2 cassette tapes including a 4 song demo and a full length release entitled The Downward Spiral. The band would begin touring and performing shows with many of metals finest bands including Testament, Deliverance, The Crucified and Vengeance Rising. The band continued off and on into the 1990s, releasing another cassette demo in 1997 with four new songs that were suppose to be from an upcoming full length album, that was never finished. The band continued to be open shows for many popular bands including P.O.D. and Ultimatum. Rumors began flying in 1990 that the Moshketeers were signing with a major label. Rumors and speculations as to what happened have been around for years, but suffice it to say that it just never happened and the tapes would never see the light of day and the masters would be locked away for many, many yearsuntil now! The Moshketeers The Downward Spiral will now see a full CD release, for the first time ever! Set to be completely restored and remastered and include several previously unreleased bonus tracks, including the rare 1997 demo. Packaged with completely brand new cover art, liner notes and much more! This will surely become a collectors item as it is only being offered as a Limited Edition of 1000 piece pressing not to be released again! - ROXX RECORDS
Tracks

PRAYER from Brasil are back with a new album, and if you like oldschool Sepultura-thrash with …