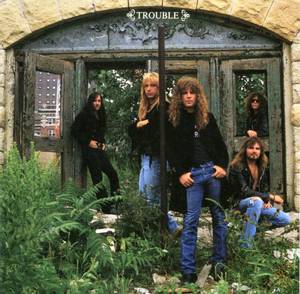 An absolute classic: the legendary album from 1990 and the pinnacle of Trouble's impressive career. Heavy Metal was never better than this! Finally re-issued!

Trouble’s debut album did great things for Metal and remains one of the darkest, thrashiest Doom albums to date. A lot of things can change in six years, especially when you’re talking Metal and the dates are 1984 and 1990. The decade may have changed them, but not in a way that suggests decay or a decline in the quality of their resolve or their skill as musicians and performers. On the contrary, Trouble’s 1990 self-titled release is arguably their most mature, boasting a fleshed out sound with unparalleled songwriting, a great production, and the time-crafted vocals of Eric Wagner which had improved major in the years since their previous efforts. All of this culminates in what is my mind the most “complete” thing Trouble ever created.

From the mid-paced chug of a killer opener in “At the End of My Daze” to the last notes of “All Is Forgiven”, I can’t see filler or anything resembling a weak link. The riffs here are some of the best ever written, by Trouble or anyone else; every song has a manically awesome main riff that demands a display of headbanging. Riffs are undoubtedly the point of focus here; they make the songs, and they’re a timeless variety of great. Also, the interplay between guitarists Bruce Franklin and Rick Wartell is some of the best lead work you will ever hear in Metal.