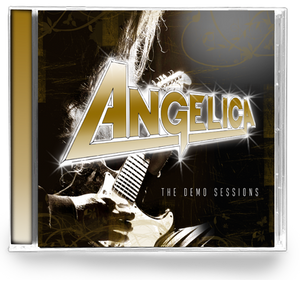 The Demo Sessions is the original demo recordings with Andy Lyon, the original lead singer of Angelica. These 9 songs were recorded before Dennis Cameron landed his 5 album record deal with Intense Records. The first 5 Songs (Demo One) were presented to the label. The last 4 (Demo Two) was their second demo that the label requested, giving them enough for a full album. The songs here are in the same order as found on the two original demo cassette tapes. S.O.S. has an incredible “Amazing Grace” guitar addition at the end. The Song “One Step” was later changed to “One Step at a Time” and “Statisfied” was later changed to “Are You Satisfied”. Angelica’s debut album went on to become one of of Christian Rock’s greatest classics and was recorded with Rob Rock (Joshua, ) at vocals.

ngelica is the brainchild of guitarist extraordinaire, Dennis Cameron and is a Christian Melodic …