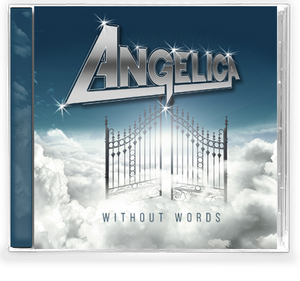 ngelica is the brainchild of guitarist extraordinaire, Dennis Cameron and is a Christian Melodic Hard Rock/Metal AOR band. Angelica debuted in 1989 and signed a 5 album deal with Frontline Music Group. Thirty Years after that first album and after a 27 year hiatus, Angelica and Dennis Cameron are back with a new album, Without Words.

Dennis is a practitioner and is great at his craft. This new album comes not only by way of many hours in the studio but also with the 48 years of him honing his guitar chops.

Dennis, who hails from Canada, is a prolific guitarist who was interviewed by nearly every music magazine in Japan. Sure their label was in the United States, but Dennis’s chops were recognized all over the world.  He was often compared to some of the great guitarists in the Christian rock scene, but most correctly compared to the greatest mainstream guitarists of all time such as Hendrix, Clapton, Satriani and Steve Vai.

His ability went way beyond “shredding”.  His playing came with feeling, emotion and a sense of timing that allowed him to reach way past a great guitar solo, something he wears as a badge of honor.  “Knowing music theory and practicing to be a good guitar player are only small parts of the formula for making good music”, Dennis states, “I spend just as much, if not more, time working on my writing, engineering and producing than I do just working on my guitar playing.”

Dennis first picked up guitar 48 years ago at the young age of 6.  Now 54 years of age, he leaves nothing off record and lets his guitar and fingers do the talking for him.

Words cannot describe what you’ll be listing to.  Literally, there are no words, it’s just Dennis and Co. doing what he does best and what few are able to accomplish; create an album of entire songs around 6 strings of amazement.  It has the Angelica sound that you’d expect, melodic with some serious drive and crunch.  You won’t be able to stop listening to “Without Words”, it’s ‘all in’ with hooks galore and top notch production.