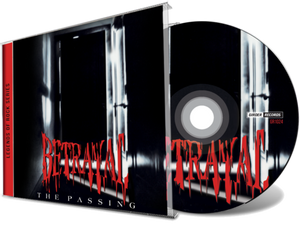 Betrayal was a forerunner of technical speed metal.  The band was formed early on as Martyr and after a few personnel changed their name to Betrayal. Their first album, 'Renaissance By Death' set the standard for thrash metal and soon after they released their second album 'The Passing' and then disappeared, but not before making a major impact on the Christian Metal market.  Both albums were originally released on Wonderland Records who also owned Intense Records (Vengeance, Sacred Warrior, Deliverance) before selling it off to Frontline Music.

Both of these masterpieces are complete unadulterated trash onslaughts mixing west coast thrash metal, and old school speed-metal with some early hardcore elements which comes through in the vocals.

The Passing, Betrayal's second album, is a polished production with more industrial influences than their first. It's still Thrash but it's clear that these guys are now seasoned and great at their craft.  Like the difference between Barren Cross 'Atomic Arena' and 'State of Control' or the difference between Stryper's 'Yellow and Black Attack' and 'Soldiers Under Command'.  All great albums but just more polished and time taken to make a stunning quality piece of work. "The Usurper" their second track takes you thrash journey of heavy breakdowns while the songs 'Ichabod' and 'Race of Hypocrisy' are 4 mins each of amazing technical progression and proficiency slowing down for 'Forest of Horrors' and 'Whispers of Chaos'. One listen through it'll become quite clear why although they put out only 2 albums in the 90's they remain favorites of thrash enthusiast across the globe.

6 Bonus Tracks. Includes the 2-song cassette single release of Fear Be Gone and …