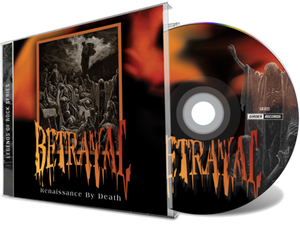 If you've followed Christian thrash for very long we probably don't need to tell you how sought after Betrayal is and to finally get both of their albums remastered is something that every single Thrash enthusiast has been dreaming of.  We've been working on making these reissues happen since last year.  We are thrilled that now that we are into the 2nd half of 2019 we can finally make it official and let you in on this tightly guarded secret.  Both Betrayal albums 'Renaissance By Death' (1991 Wonderland) as well as 'The Passing' (1993 Wonderland) are getting remastered by the great Rob Colwell.

Renaissance By Death starts off with this incredible instrumental that is epic with keys, dulcimer and then dives deep into a dark minor doom-like progression that is slow and dark. The second song The Invitation sets the tone for this albums that kicks into high gear with turns and with speed fluctuations. Double bass, non-growling vocals abound on this album with some very unique guitar tones. The vocals are reminiscent of early Crucified, Believer and Slayer.  The album also boast some of the greatest song titles such as Mortal Flesh, Prophets of Baal, Escaping the Altar and more.  However this version will contain correct spelling of all song titles. ; )  - GIRDER

Betrayal was a forerunner of technical speed metal.  The band was formed early on as Martyr …