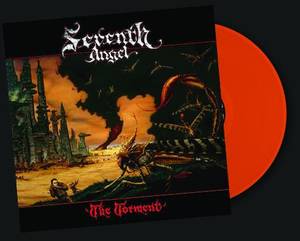 Early 90’s Seventh Angel is a U.K. thrash band that wedded speed metal with doom and gloom and the irresistible vocals of elite frontman, Ian Arkley. The iconic debut, The Torment, offers emotion-packed songs with lyrics that promise eternal suffering to the unrepentant (“Tormented Forever”) while “Expletive Deleted” encourages Christians to cleanup their language. Originally released on The Edge Music/Kingsway Music in the U.K., the album found its way to the U.S. through Pure Metal Records in 1990. The Torment offers high quality thrash that rivaled anything in the mainstream or Christian markets. Seventh Angel’s debut masters the art of big, thick, crunchy guitars with doomy thrash vocals. Considering the quality of the album, and the unique sound of Seventh Angel, it didn’t take long for the band to garner a large and loyal fan base. Seventh Angel produced some serious magic on this album, contocting some dark, artistic thrash metal that floored metalheads with the band's ability to wrap a clever melody in a tasty wall of distortion! The album would eventually make the HM Magazine Top 100 Metal Albums of All Time at number 51. And, of course the brilliant cover art was created by famed British fantasy artist, Rodney Matthews. The 2018 Retroactive Records reissues have been digitally remastered by Rob Colwell at Bombworks Sound and with full band approval. CDs are packaged in a jewel case with a 12 page insert featuring amazing band pics, a write up to fans from Ian Arkley, and lyrics. The Vinyl reissue is Orange Vinyl with a full color jacket and insert. After being reissued several times, we can say definitively the album has never looked or sounded better! For fans of Sabbat, Trouble, Vengeance Rising, Believer, Detritus, Deliverance, Metallica, and Exodus.

4 I Of The Needle

7 Locked Up In Chains