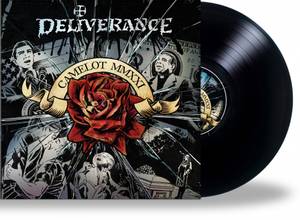 ABOUT THE ALBUM
Originally recorded in 1995 and released on Intense Records, Camelot in Smithereens blended bits of thrash with technical progressive metal.  Deliverance vocalist and band leader, Jimmy P Brown II always lamented that the final version of the album was far from what his original vision entailed.  According to Deliverance frontman, Jimmy Brown II, "The Camelot story embodies a lot of allegory, but it's an important tale!  It can, and will mean different things to different people.  I know what it means to me, and I am truly glad that after these years it can be revealed to you!"

Camelot tackles some courageous and vulnerable subject matter, like depression, sexual misconduct, questioning of one's faith, and seeking God. The songs sort of have an emotional ebb & flow that begins with posing the question of "Where are you?" to God, followed by a recounting of some negative things going on in the protagonist's life, followed by a series of songs talking about the daily struggle between purity & sin, and wrapping up with an ending that takes the approach that no matter what comes in life, we are to look to God for hope, answers, and ultimately salvation.

In 2021, Jimmy Brown and company took on the task of re-recording the album from the ground up, and Jimmy wrote a book as a companion piece so Camelot finally reflects the original intention and vision intended for this classic album.  Only the Deluxe Edition includes the entire book + the CD of Camelot Redux + Camelot (1995 remastered) + DVD (band footage and interviews). On par with the greatness of Queensrÿche - Operation: Mindcrime (yes, we are serious), Jimmy Brown and the band have gifted fans with a true treasure of artistic and musical brilliance - sheer, unadulterated brilliance.