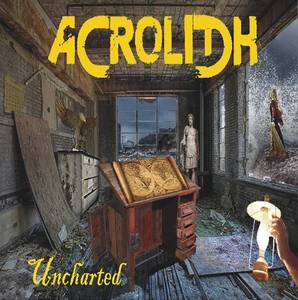 The wait is over for Acrolith fans! Roxx Records is very excited to be partnering with Acrolith on this very, very limited CD pressing of their out of print debut release!

Progressive rock-metal band ACROLITH has teamed up with ROXX RECORDS to bring you their out-of-print and much requested debut CD ‘Uncharted’. Born when the collaboration of long time friends and former bandmates Brian Day (Black With Stars, Apaugasma) and Andrew Sauber, united with drummer Patrick Rebsch to write an album that reflected their faith as well as their love of music with more depth. Living up to their name, ACROLITH’s ‘Uncharted’ takes the listener on a journey through an amalgam of moods with a hard-rock / metal foundation that would serve as a launch for their (still active) musical expeditions. Originally released in 2015, copies of this album sold out quickly and haven’t seen a reissue until now. This ROXX offering includes 4 previously unreleased bonus tracks that you won’t find anywhere else, 2 of which include original member Branden Meade who did not continue with the band and was absent on the original release.