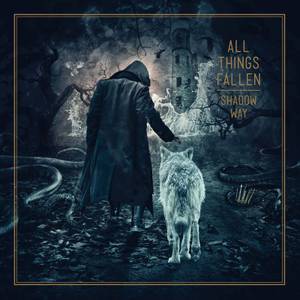 The Swedish progressive metal band ALL THINGS FALLEN, featuring members of Pain of Salvation and Darkwater will release their new album "Shadow Way" on CD and digital on June 3rd via Blackoak Records.

ALL THINGS FALLEN was started in 2017 by Markus Sigfridsson (Darkwater, Harmony, Lance King etc). On the first album Leo Margarit (Pain of Salvation) joined on drums and Erik Tordsson on lead vocals. Their first self-titled album was released in 2019 via Blackoak Records.

Old fans will certainly not be disappointed by the new album "Shadow Way" and any fan of melodic atmospheric metal will enjoy this album. The album is even more melancholic and melodic and has a darker vibe to it than the first album. It also flirts with the 70´s Rainbow style but with a modern production.

Joining Markus, Leo and Erik on "Shadow Way" is Raphael Dafras (Edu Falschi, Almah) on bass. As on the first album you will also on the new album find an amazing guest appearance by Maria Grigoryeva on violin. The album was mixed and mastered by Dennis Koehne (Orden Ogan, Sodom).

Don't miss "Shadow Way", a perfect album for fans of atmospheric and progressive metal and bands like Evergrey, Soen, Pain of Salvation and Darkwater.

All Things Fallen is:

Now shipping! Darkwater are back with their new album "Human", and it surely won't …

ALL THINGS FALLEN: All Things