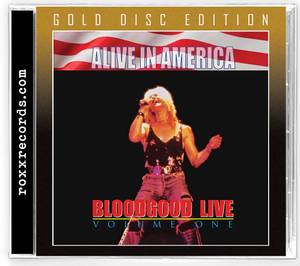 REMASTERED FOR THE FIRST TIME BY ROB COLWELL (BOMBWORKS)

Roxx Records is always striving to bring you the best quality reissues and some of the best new Christian Rock on the market. While we are more than excited to bring these two new reissues back to life, it’s a little bittersweet for us. It was early this year, when planning our 2022 release schedule, that these two titles were added to our release schedule. In fact, we had already begun working on them. Like the rest of the world we were shocked and saddened on July 29th when we learned of the untimely passing of one of the most iconic bass guitarists and the true ‘Metal Missionary’… Michael Bloodgood!

We were just about to send these off to press, and then we put them on hold. In fact, we were going to hold off on them even longer, but after discussing with Intense Records owner, we decided to move forward, in an effort to celebrate his amazing life and contributions to the music world, as well as to provide a little extra money to the family through the licensing costs of this release.

Without further ado, we are very excited for our next pair of Limited Edition Gold Discs featuring two much sought after titles in the Bloodgood catalog, “Live in America Volume I” and “Shakin The World Volume II” Both of these classic albums have been beautifully remastered by Rob Colwell of Bombworks Sound in addition to having been given a beautiful new layout and design by Scott Waters of NLTM Graphics.

Each title comes complete with 12 page booklets and full lyrics are included here. Each title will be released on the prestigious gold disc format and will be released in a very limited quantity of only 500 pieces.  Both titles will also come with reversible covers. This title is being released just in time for the holiday season on October 28, 2022 and pre orders are live now, and if you act fast there is a special package limited to only 50 copies that will include 2 added bonus stickers of each album cover.

Head over to Roxx Records today and get those pre orders in, while you’re at it check out the newly remastered edition of one of the most classic medleys in Christian Metal history. Which is featured on “Live in America Volume I”.