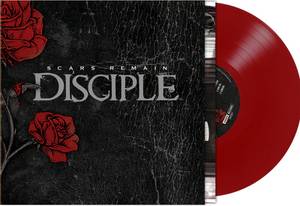 Scars Remain was released in 2006. The song "After the World" was the eighth most played song on Christian Hit Radio stations in 2007. Scars Remain, earned a number one Christian rock hit and even more impressive won a 2008 Dove Award™ for ROCK ALBUM OF THE YEAR.

The song "Game On" was a big hit and at the time of writing this has 3.58 Million Spotify streams.  The song was used for numerous television showings and commercials. These include the official theme song for WWE Cyber Sunday 2006, ESPN's NFL Live on November 1–2 during the plays of the month, during Fox Sport's The Best Damn Sports Show Period, the NFL Network's Total Access show, Speed TV's Speed Report, and as background music for CBS' CSI: Miami and Criminal Minds commercials.

First time on Vinyl (RED ROSE) with printed inner sleeve with lyrics and is part of the Limited Run Vinyl™ series.