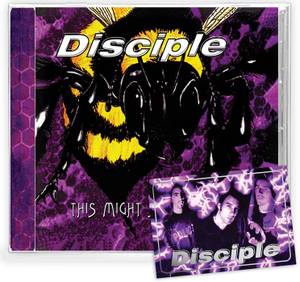 Disciple's second album This Might Sting a Little (1999), generated them two GMA Dove Award nominations and two Number 1 Christian rock hit songs with "I Just Know" and "Big Bad Wolf." This Might Sting A Little is the only Disciple album to contain no ballads whatsoever but what it lacks in ballads it makes up for in intense metal riffs with a punch in the mouth revelation.  No punches are pulled in this razor sharp collection of tracks that strip away ambiguity to tell it like it like it is.

Blending a hard rock style with massive grooves and a Rage Against the Machine vocal attack these guys rose to be the premier Christian groove/semi-rapcore band of the decade. Where the My Daddy Can Whip Your Daddy EP (Warner, 1997) anchored their credibility as a musical act, it wasn’t until 1999 and the release of Sting where Disciple established with boldness that they were a ministry band first and foremost – the songs possessed a massive message with a massive musical force to propel them with clarity to the world.
– Jonathan “Doc” Swank, Heaven’s Metal Magazine

DISCIPLE: What Was I Thinking