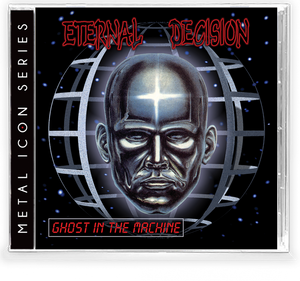 ABOUT THE ALBUM
Eternal Decision put Oklahoma on the map with their 1996 release of the band’s self-titled debut classic thrash album. The world was riding high on all things Metallica and the debut ED mastered the best of Metallica (Master of Puppets, Ride the Lightning, etc). Christian metal fans were elated to have a band with bold Christian lyrics and that popular, addictive hard edged, radio-ready crunchy, chuga-chuga thrash metal. The 1996 album has been out of print for many many years, yet it was released three times by 1999! All of those releases had “issues” and the Retroactive records reissues have been given special attention to make sure fans are rewarded for their patience with the ultimate collector’s reissues (for all three albums). With the second (Ghost...) and third (III) albums, Eternal Decision matures from the thrash-by-numbers perfection of the debut to emphasize huge, massive grooves (ala the Black album and Pantera) to go along with their love of thrash metal. Lyrical themes on Ghost in the Machine deal mostly with addiction and the constant struggle between spirit and flesh: “I need you now / To help me with this pain inside” (“Through the Pain”). The third album (III) features the ultra rare classic Deliverance cover of “Belltown” as it’s bonus track. Now part of the Retroactive Records Metal Icon Series, metal fans can rejoice - these classics are finally available - looking and sounding the best they ever have - and each release includes the numbered collector’s edition foil-stamped trading card to make these CD reissues even more essential purchases.  For fans of Metallica, early Deliverance, Megadeth, Pantera.