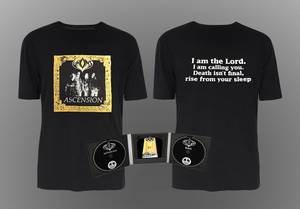 Nordic Mission is VERY proud to present a re-release and re-master of GROMS one and only album "Ascension" to be released November 15th!

CD1 "Ascension"
1. Ascension
2. From Dust To Dust
3. True Wisdom
4. The Riddle
5. Truth Misunderstood
6. Noone
7. The End Of The Age
8. The Voice Of Righteousness
9. The Just Shall Live By Faith