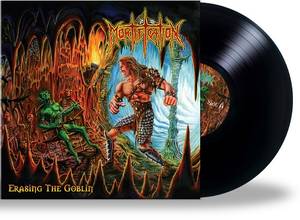 Continuing with our chronological release of Mortification albums on VINYL, Soundmass are happy to announce the LP release of Erasing The Goblin.

Erasing The Goblin (2006), their 12th studio recording, is what early fans had been praying for – a return to an out-and-out death/thrash metal album. It doesn’t rehash their classics, though – it is its own monster – the fastest, heaviest Mortification release in over a decade. The guitars are dirty and gnarly, Steve returns to deeper growled/guttural vocals, the mix is good and the production is beefier. Every performer shines: Mick Jelinic knocks out great riffs along with complimentary solos, Damien Percy’s (RIP) excellent drumming is solid and merciless and Steve Rowe brings outstanding, top-notch bass. The strong songwriting is a blend of old and new Mortification – it’s pummelling and rampaging and intense, yet always exhibiting their signature groove. As one critic put it, Mortification “have been a deadly and omnipresent force of metal’s unseemly underbelly” and Erasing The Goblin – clearly one of their strongest albums in a long time – proves why.

15 years since its initial release, this is the first time Erasing The Goblin has ever been available on vinyl. Remastered for vinyl and with Troy Dunmire’s original cover artwork in full-sized splendour, this edition – a limited pressing of 250 copies on black vinyl – is a must for fans of this pioneering Aussie band and any true metal enthusiast.

TRACK LISTING:
Side A
Razorback
Erasing The Goblin
The Dead Shall Be Judged
Escape The Blasphemous Tabernacle
Your Time